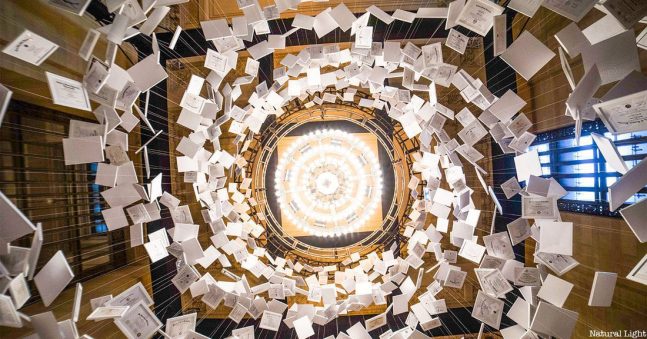 Da Vinci of Debt calls attention to the rising costs of earning a college diploma and the fact that most students canâ€™t attain the diploma without a crippling amount of student debt. The installation features more than 2,600 diplomas with the average cost of each diploma at $180,000. Da Vinci of Debt has been valued at $470 million dollars – $20 million dollars more than Da Vinciâ€™s â€œSalvator Mundiâ€ (his most expensive work). Currently, in the United States student loan debt is at an all-time high of $1.7 trillion.

The Da Vinci of Debt, erected at Grand Central Terminalâ€™s Vanderbilt Hall, was facilitated due to help from United Staging and Rigging’s 4-tower self-climbing truss system and great care toward the historic architecture during the install.â€‹

Time and Space Fabrication presented the team at United Staging and Rigging a rough design of conventional trusses and a 4-tower system. The maximum capacity for this particular tower system is 4000 lbs. per tower. USR designed the self-climbing superstructure to suspend the sculpture. A self-climbing grid is a system constructed out of truss that utilizes towers set in 4 corners with chain hoists to raise and lower the truss â€œgridâ€. â€œSelf-Climbersâ€ are used primarily for temporary outdoor applications such as large festival roof systems or when there are no hanging options above, which was the case in Vanderbilt Hall.Once the self-climbing truss grid was in place, the diplomas were hung by a dozen Time and Space Fabrication crew members using over 300 pre-cut pieces of 3/32â€ wire rope. Each cable was attached to a 18â€™ and 22â€™ truss circle. Each of the diplomas were attached individually.

Familiar with common challenges of an install, USR went headfirst into this project with their most dynamic team members to…cover every step of the project including the loading and unloading the trucks on the street and accessing the space through a rather narrow doorway off of the sidewalk. Moving large pieces through a very congested pedestrian sidewalk through one of the terminal’s main entrances/exits was also challenging.

The teams were well aware of the need to set up the self-climbing grid without damaging Grand Central Terminalâ€™s historic architecture. Protecting Vanderbilt Hallâ€™s architecture was one of the most important aspects of the job, and USR was careful to plan and utilize knowledge from previous installs in delicate locations. Floor protection was necessary wherever a piece of metal was to be placed on the granite floor. The crew used utmost care when bringing in rather large equipment, sometimes with inches to spare. When working in such a historic space, the utmost respect for the building and its history is given by production crews.

Another challenge was trying to stay within the 120 psf (pounds per square foot) rating of the granite floor. The entire grid weighted almost 18,000 lbs., so we had to distribute 4,500 lbs. per tower in a 3’x3′ area.
â€‹- Luke Lohnes, Project Manager

Honored to Support this Art – Literally and Figuratively

Funded by ‘Natty Light’ – Apply to Win a Grant

The installation was funded by Natural Light- a reduced calorie light lager made by Anheuser-Busch. The Natural Light College Debt Relief program, by Anheuser-Busch, provides $1 million each year to help students reduce their student debt. There will be 25 total recipients and video submissions will be accepted until March 21, 2021.